The solid yellow flag universally requires drivers to slow down due to a hazard on the track, typically an accident, a stopped car or debris. However, the procedures for displaying the yellow flag vary for different racing styles and sanctioning bodies.

In Formula One racing, a yellow flag displayed at the starter’s stand or a marshal station indicates that there is a hazard “downstream” of the station. The manner of the display depends on the location of the hazard:

When shown at a station, drivers are forbidden from overtaking until either the hazard or the next flag station displaying a green flag is passed. This flag is shown at the discretion of the marshals manning the station. 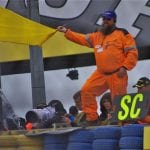 When there are circumstances where double-waved yellow flags are needed yet usage of the safety car is not warranted, then the race will be under a Virtual Safety Car period, during which all flag points will display a ‘VSC board’ and all light panels on track will display the letters ‘VSC’ surrounded by a flashing yellow border. Under the VSC procedure, all drivers on the track must reduce their speed and stay above a minimum time set by race officials at least once in each marshalling sector. Overtaking is not permitted unless if another driver enters the pit lane or if a car slows down due to an obvious problem. When deemed safe to end the VSC procedure, teams are notified via the official messaging system 10 to 15 seconds before green flags are waved

Most races in the FIA World Endurance Championship may be under a Full-Course Yellow period upon discretion of the race director when deemed necessary for safety reasons. Once declared, all flag points will display a ‘FCY board’ and all cars on track must immediately slow down to 80 kph and maintain their distance to the cars in front and behind. Overtaking is forbidden until green flags are waved.

The Full Course Yellow procedure is not used during the 24 Hours of Le Mans due to the circuit’s length of 13.626 km. Instead, portions of the track can be divided into Slow Zones, identified by track-side horizontal markings at both beginning and end, and ‘Next Slow’ boards in the preceding zone. Within the zone, all marshal posts will display double-waved yellow flags and ‘SLOW’ boards, and all light panels will display the letters ‘SZ’ surrounded by a flashing yellow border. All cars within the zone must slow down to 80 kph until they are clear of the waved green flag at the end.

In both NASCAR and IndyCar, a single yellow flag waved from the starter’s stand places the race under caution. At this time, a pace car will enter the course and lead the field at a safe, predetermined, reduced speed. On oval tracks, yellow lights universally supplement the primary flag at the start/finish line. These lights usually operate in a flashing manner, in order to quickly gain the attention of the drivers. The field is locked into place at the onset of caution periods and no one is allowed to pass another car without mutual consent (excluding crashed and immobile cars). In some races, though, cars may pass one another on pit road during a caution period. When the starter shows a furled yellow flag, it indicates one lap to green

On road course races in IndyCar, a single yellow flag at a marshaling station indicates a “local” yellow, similar to the aforementioned rules in Formula One. In these cases, the pace car does not enter the track, and the caution period is limited only to that particular segment of the track. Green flag racing prevails around the remainder of the course. Twin yellow flags displayed at the starter’s stand indicates a “full-course caution”, in which the pace car would enter the track and the entire course would be under caution. This might occur for a serious crash or other major hazards. NASCAR has also experimented with “local yellows” on their road course events.