Racing flags are traditionally used in auto racing and similar motorsports to indicate track condition and to communicate important messages to drivers. Typically, the starter, sometimes the grand marshal of a race, waves the flags on top of a flag stand near the start/finish line. Track marshals are also stationed at observation posts along the race track in order to communicate both local and course-wide conditions to drivers. Alternatively, some race tracks employ lights to supplement the primary flag at the start/finish line.

Status flags are used to inform all drivers of the general status of the course during a race. In addition, the green, yellow, and red flags described below may be augmented or replaced by lights at various points around the circuit. 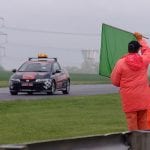 The solid green flag is usually displayed by the starter to indicate the start of a race. During a race, it is displayed at the end of a caution period or a temporary delay to indicate that the race is restarting. The waving of a green flag is almost universally supplemented with the illumination of green lights at various intervals around the course, particularly on ovals.

The red flag signals the suspension of the current session. The solid red flag is displayed when conditions are too dangerous to continue the session. Depending on the series and the circumstances, the cars are typically directed to proceed immediately to pitlane or to stop at a specific spot on the track. In some severe cases the cars might be required to stop immediately where they are. During red flag conditions, repair work in the pits or garage area is typically prohibited, except in non-points paying races.

There are numerous hazards that might cause a need to halt or prematurely end a session. Many hazards, such as rain, darkness, a blocked course (due to debris, water, or safety vehicles), a car on fire, or a multi-car crash might prompt series officials to call for the red flag.

Some series use a red flag when a severe accident has occurred or to temporarily stop a race nearing the end of a race. This is usually done when a collision requiring cleanup would otherwise extend the caution period to take longer than the number of race laps available to finish the race, when a fuel spill occurs on the circuit, or to maximize safety teamwork. During such a red-flag period, cars are directed to stop in line at a specific point on the track, usually directly opposite to the incident. 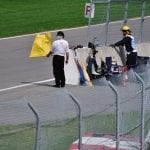 The solid yellow flag universally requires drivers to slow down due to a hazard on the track, typically an accident, a stopped car or debris. However, the procedures for displaying the yellow flag vary for different racing styles and sanctioning bodies.

Click here to read our full article about the use of the Yellow Flag, including the use with Safety Car, Virtual Safety Car, and Slow Zones

The red and yellow striped flag also called surface flag is displayed stationary at local flag stations to indicate that track conditions have changed due to substances on the track which could reduce grip or cause a car to lose control. Generally, oil, coolant, small pieces of debris or sand are the hazards. It can also be “rocked” back and forth to indicate a small animal on the racing surface. Many organizations will display this flag for only two laps, after which the changed surface is considered to merely be “part of the track”. 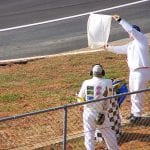 In all championships which use the FIA International Sporting Code, as well as North American road racing, the white flag indicates the presence of an official car or a competitor moving at below normal speed in the section of track covered by the flag station.

In NASCAR, IndyCar, North American motorcycle road racing, and most American forms of motorsports, a waved white flag displayed at the starter’s stand indicates the start of the final lap of the race.

Instruction flags are usually used to communicate with one driver at a time. Normally the flags are being waved together with a sign holding the number of the driver.

The solid black flag is used to summon a driver to the pits. It is usually associated with a penalty imposed on the driver for disobeying the rules, but may also be used when a car is suffering a mechanical failure, leaking fluid, exhibiting damage such as loose bodywork, loose hood, dragging bumper, or any other damage that could potentially become a hazard to the driver or other competitors. In some cases, the black flag may be used to call a driver to the pits when their radio is not working.

In FIA International-permitted series, the black flag means an immediate disqualification for the driver involved. The car number of the summoned driver is displayed on the finish line. Some sanctioning bodies wave the black flag at all observation posts simultaneously to order all drivers to clear the track after the starter waves the red flag, often in the case of a serious accident.

When the black flag is used for disciplinary reasons in most races in North America, a driver is required to return to pit lane for at minimum a drive-through penalty. A driver may be black-flagged for failing to maintain a reasonable minimum speed, even if no apparent damage or mechanical failure is present. In almost all cases, the team is given a chance to make repairs to the car and get it up to an acceptable condition. If the driver still cannot maintain minimum speed in relation to the leaders after repairs, the driver may be required to park for the remainder of the race.

A mechanical black flag is a black flag with an orange disc in its center indicates that a vehicle is being summoned to the pits due to serious mechanical problems or loose bodywork that presents a risk to other competitors.

A diagonally divided black-and-white flag is displayed with a car number to indicate a penalty for unsportsmanlike conduct. This flag can be displayed if a car tries to intentionally drive another car off the course, or if a driver gets out of his or her car and initiates an altercation with another driver.

Some administrators like NASCAR and IndyCar do not distinguish mechanical problems or unsportsmanlike conduct from rules violations and simply use the solid black flag for all violations.

Some leagues use a black flag with a white saltire. This is displayed with a car number if a driver ignores the other black flags for an extended period and also it indicates that that car is no longer being scored. In both NASCAR and IndyCar, the car is not scored again until it pays attention to the black flag by pitting once this flag is displayed.

Ignoring the black flag or the black-white cross flag intentionally may result in post-race disciplinary action in addition to disqualification from the race. Fines, probation, suspensions, and other penalties may result, depending upon the severity of the situation.

A blue flag, sometimes with a diagonal yellow, orange, or red stripe, informs a driver that a faster car is approaching and that the driver should move aside to allow one or multiple faster cars to pass. During a race, this would only be usually shown to a driver who is getting lapped but during practice or qualifying sessions, it could be shown to any driver. In most series, the blue flag is not mandatory—drivers obey it only as a courtesy to their fellow racers. As such, it is often referred to as the “courtesy flag”. In other series, drivers get severely penalized for not yielding or for interfering with the leaders, including getting sent to the pits for the rest of the race. In Formula One, if the driver about to be lapped ignores three waved blue flags in a row, he is required to make a drive-through penalty. The blue flag may also be used to warn a driver that another car on the same lap is going to attempt to overtake them.