Team WRT has sealed a record-extending eighth Sprint Cup title, while Dries Vanthoor and Charles Weerts are the provisional drivers’ champions for a second year in succession following a day of action and drama at Brands Hatch.

The Belgian squad scored victory in the opening contest and backed it up with a runner-up finish in the second outing, which was won by the #6 Mercedes-AMG Team Toksport WRT of Luca Stolz and Maro Engel. Weerts and Vanthoor now have an insurmountable points advantage and need only compete together at next month’s Sprint Cup finale to confirm their title.

Their success was witnessed by a significant number of spectators, who made the most of perfect Bank Holiday weather at the popular Kent venue. But while Team WRT can already celebrate there will be titles on the line next month, with both the Pro-Am and Silver Cup classes set to be decided at Valencia on 25-26 September. 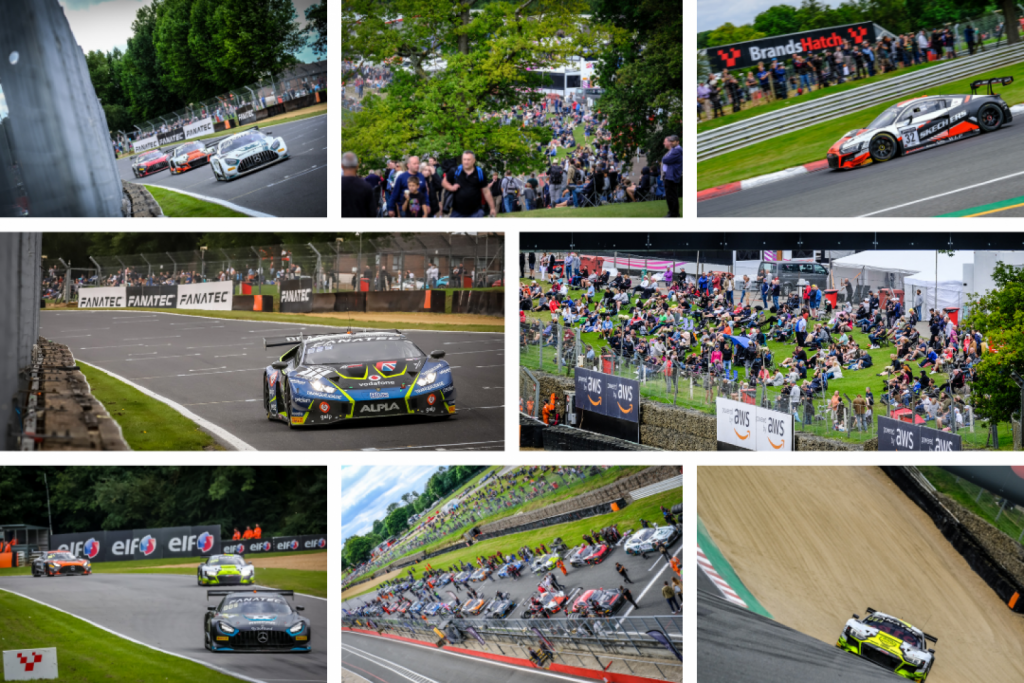 The opening 60-minute contest produced a thrilling spectacle before ending in dramatic fashion. Ben Barnicoat (#38 JOTA McLaren) was the star of the opening half of the race, charging past Weerts on the first time through Paddock Hill Bend and overtaking pole-sitter Timur Boguslavskiy (#88 AKKA ASP Mercedes-AMG) to snatch the lead.

From there Barnicoat produced a thoroughly impressive stint, lapping a second faster than the rest of the field and building 16-second advantage over the #88 Mercedes-AMG by the time the pit window opened on the 25-minute mark.

Boguslavskiy held off Luca Stolz (#6 Mercedes-AMG Toksport WRT) while Weerts kept the #32 Team WRT Audi within sight of the podium places. With Barnicoat disappearing into the distance this trio elected to stop as soon as the pit window opened. A quick service from Team WRT allowed Vanthoor to split the two Mercedes-AMG, which would prove crucial later on.

Barnicoat pitted on the half-hour and handed over to Oliver Wilkinson. The JOTA squad had been dominant, but the pace of Raffaele Marciello in the #88 Mercedes-AMG was becoming a concern. Having replaced Boguslavskiy, the Italian was able to take almost a second a lap out of Wilkinson’s advantage and with 10 minutes left on the clock he was on the rear of the McLaren.

Wilkinson defended superbly, making no mistakes and preventing Marciello from pulling alongside him. But the McLaren driver’s task was made more difficult when he came upon lapped traffic. Marciello had problems, too, with Vanthoor arriving on the scene and forming a three-way battle for the lead.

The decisive moment came when Wilkinson and Marciello both attempted to lap the #93 Sky Tempesta Racing Ferrari of Giorgio Roda with just five minutes left on the clock. The Mercedes-AMG was sandwiched between the Ferrari and the McLaren, causing contact with both. This sent the McLaren off-track at high-speed, while the Ferrari spun and was fortunate not to be hit by an oncoming car.

Marciello continued and assumed the lead ahead of Vanthoor, while the race was quickly neutralised due to Wilkinson’s accident. The McLaren had cleared the barrier and come to a rest on a bank, but fortunately the British driver was able to climb from the car uninjured.

Marciello took the chequered flag, but the incident was placed under investigation and the Italian was ultimately judged to have been predominantly responsible. This promoted the #32 Team WRT Audi to top spot, ahead of the #6 Mercedes-AMG Team Toksport WRT and the Silver Cup-winning #31 Team WRT Audi of Ryuichiro Tomita and Frank Bird.

Starting from pole for the second contest, Marciello was able to immediately put the disappointment of race 1 behind him. The Italian made the perfect start, pulling clear of Engel into Paddock Hill Bend to lead the field on the run up to Druids.

While there were no issues at the front a number of incidents occurred further back, culminating in contact between the #114 Emil Frey Racing Lamborghini and the #8 RAM Racing Mercedes-AMG that left the latter beached in the gravel. As such, the safety car was deployed so that it could be recovered safely.

Once racing resumed Marciello was able to ease away again, dropping Engel and Vanthoor by half a second each lap. When the pit window opened the #6 Mercedes-AMG was the first to stop, with Stolz taking the wheel from Engel shortly after the 25-minute mark. Vanthoor pulled in one lap later, but despite another fast turnaround from the Team WRT mechanics Weerts could not overhaul the Toksport WRT machine.

Marciello waited until the last possible moment to make his stop, handing over to Boguslavskiy for the final 25 minutes with a seven-second advantage. Stolz wasted little time in catching the Russian, but once on the tail of his fellow Mercedes-AMG man he could not force his way past. In third spot Weerts ran a measured race, knowing that a podium was enough to ensure the title.

It remained this way until the final lap, but once again there was late drama in store. With just a few corners left to negotiate Boguslavskiy ran off the circuit, allowing both Stolz and Weerts to pass. The #88 Mercedes-AMG clearly had a serious problem and could only limp across the line in sixth position, by which time it had shed its right-front tyre.

Stolz therefore took the win, despite leading for less than a lap, while Weerts claimed second and provisionally wrapped up the 2021 Sprint Cup alongside Vanthoor. Petru Umbrarescu clinched third in the #89 AKKA ASP Mercedes-AMG he shares with Jules Gounon, providing some consolation for the French squad after it had watched another win slip away.

While the overall championship is settled, the Silver Cup and Pro-Am title battles will both go to the season-closing Sprint Cup contest at Valencia. Team WRT earned Silver honours in the opening contest after benefitting from a post-race penalty for the #14 Emil Frey Racing Lamborghini. Ricardo Feller and Alex Fontana won on the road by finishing fourth overall, only to be penalised for a mid-race pit stop infringement.

This promoted the #31 Audi of Ryuichiro Tomita and Frank Bird into top spot, giving the Belgian outfit a second class win of the season following their breakthrough triumph at Misano. The #90 Madpanda Motorsport Mercedes-AMG was second in the opening contest, continuing the form that carried the Spanish squad to victory at the TotalEnergies 24 Hours of Spa, while the #7 Toksport WRT Mercedes-AMG completed the podium.

The latter took the start of race 2 from pole and showed impressive pace on its way to class victory. Oscar Tunjo handled the opening stint before Juuso Puhakka took over for the second 30 minutes, chasing the #89 AKKA ASP car home and narrowly missing out on an overall podium. The #31 Team WRT Audi finished as runner-up, helping Tomita and Bird to cut Fontana’s championship lead to 17.5 points ahead of the decider. The #7 Toksport WRT crew also retain an outside shot at the Silver crown thanks to their excellent weekend.

Barwell Motorsport was in a class of its own at Brands Hatch, taking Pro-Am honours in both races with its #77 Lamborghini. Miguel Ramos and Henrique Chaves had secured a pole position sweep on Saturday and maintained their form on race day, with both drivers showing impressive speed on their way to victory. They beat the #52 AF Corse Ferrari of Louis Machiels and Andrea Bertolini in the opening contest, while the #188 Garage 59 Aston Martin sealed runner-up in race 2.

Having started the weekend second in the standings, the Barwell squad now holds a lead of 14.5 points and is in a strong position to seal the Pro-Am crown at Valencia. This class has been particularly unpredictable, however, and four crews remain in the hunt ahead of the finale.

Before the trip to Spain, the Fanatec GT World Challenge Europe Powered by AWS Endurance Cup season will resume next weekend with a three-hour race at the Nürburgring (3-5 September). Having already captured the Sprint Cup crown, Team WRT will look to close the gap at the top of the Endurance standings and add yet another title to its collection.

Dries Vanthoor: “It’s pretty unreal to be champion with one round still to go. It’s been an amazing job from the team, Charles, our engineer Wim and all the mechanics, especially this weekend. Of course, a big ‘thank you’ also goes to Audi for providing us with a car that can always fight. It has not always been easy, we had some ups and downs, but we just kept going. To be runner-up twice and now champion two years in a row is just unbelievable.“

Charles Weerts: “I’m really delighted about this. We had a great year and scored consistent points. We came to Brands Hatch knowing that Mercedes-AMG was really strong, but at the end of the day we did a fantastic job thanks to our great crew, great mechanics, great engineers, and also great driving by Dries. Now we can go to Valencia and just enjoy ourselves and, as always, do our best.”