In line with its commitment to support the world’s best female racers competing within a mixed environment, the FIA Women in Motorsport Commission is backing one of its strongest all-female line-ups for an all-out assault on the 2020 IMSA WeatherTech SportsCar Championship with GEAR Racing. At the opening round, the Rolex 24 At Daytona this weekend, the team’s season-long drivers Katherine Legge and Christina Nielsen will be joined by Tatiana Calderón and Rahel Frey to contest the Florida endurance classic aboard their Grasser Racing Team-run Lamborghini Huracán GT3 in the highly competitive GT Daytona (GTD) class. 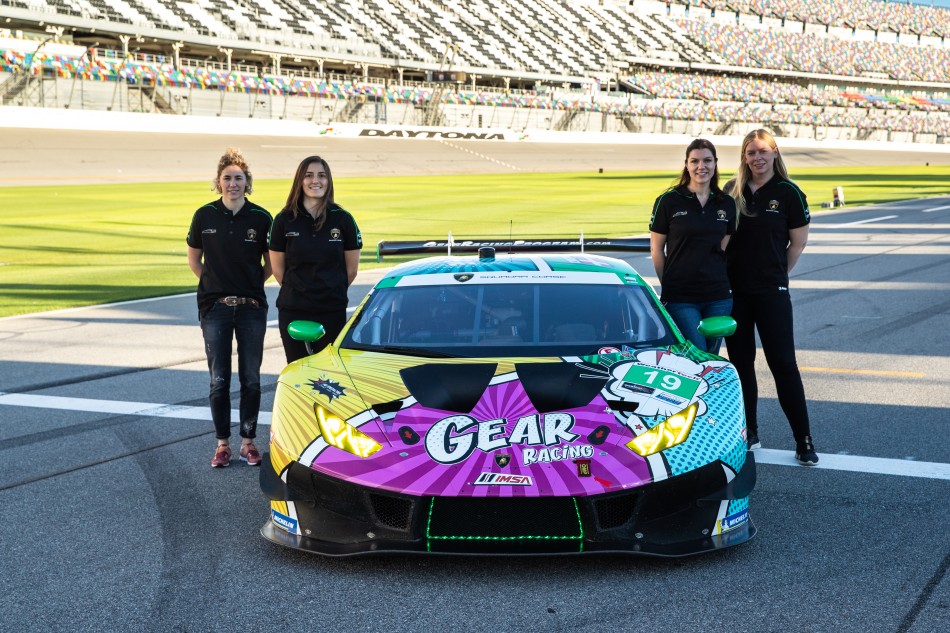 Michèle Mouton, President of the FIA Women in Motorsport Commission, said: “This is a very strong line-up for Daytona and another great opportunity for professional female drivers to prove themselves on a mixed grid. They have a very successful team running the car and together there is great potential for some top results.”

GEAR Racing is part of the GEAR Project, standing for Girl Empowerment Around Racing, and – in line with the Women in Motorsport Commission’s objectives – the initiative aims to inspire, develop and support future generations of female drivers, mechanics, engineers, and executives.

Both Legge and Nielsen are proven race winners in the American sportscar series, the Briton also claiming second in the 2018 GTD standings and the Dane becoming the first woman to win one of two GTD titles. Rahel Frey is also no stranger to sports car racing, the Swiss driver’s two podium placings helping to secure her crew fourth in the LMGTE category as part of the 2019 Iron Dames European Le Mans Series team. Alfa Romeo Racing Team’s Formula One test driver Tatiana Calderón will be making her debut in the series at Daytona.

Following the mandatory three-day test session – the ROAR Before the Rolex 24 – Katherine Legge said: “This coming season is going to be the best yet! We have a fantastic team behind us and we really feel that we have a legitimate shot at wins and ultimately the championship. The ROAR test went really well. It was the first time for all of us in a new car and with a new team, and yet we still showed pace early on. This coming season is an amazing opportunity to showcase the very best female driving talent. To partner with such a huge name in motorsport – Lamborghini – really shows how far things have developed over recent years for women in motorsport and a significant part of that is thanks to the work of the FIA’s commission.”

Tatiana Calderón: “I’m very excited to compete in my first 24-hour race with GEAR Racing by Grasser alongside Katherine, Christina and Rahel. To make my debut in sports cars with such a team in such a special place is an incredible opportunity. I have been learning a lot from endurance racing since testing earlier this month and it is great to have such talented and experienced drivers to get all the key information from. I’m convinced we have all the ingredients to be fighting for the top. It’s a very challenging race but we are up for it!”

Mark Ruggieri, Team Principal, GEAR Racing: “I’m honored to have the opportunity to work with this amazing group of people. When we first arrived at the ROAR, and without a moment of hesitation, these ladies immediately went to the garage, set aside their luggage and began discussing the racecar. Given this driver line-up, of course, I expected the very best, but I witnessed a level of dedication that only the most elite drivers exhibit. Meeting Gottfried Grasser of GRT was the same. He and I commenced our partnership with a meeting at the new shop a few hours away from Daytona when the car first arrived from Austria back in November. I spent several days with the team and was amazed at the level of accuracy and precision they operate with. It’s very clear to me why they have been so successful. Altogether, this is a winning combination.”

The Rolex 24 At Daytona takes place on the iconic 3.56 mile Daytona International Speedway on 25-26 January and will see the FIA Women in Motorsport supported crew compete within a field of 18 GTD class cars vying for victory in America’s most prestigious sports car event.