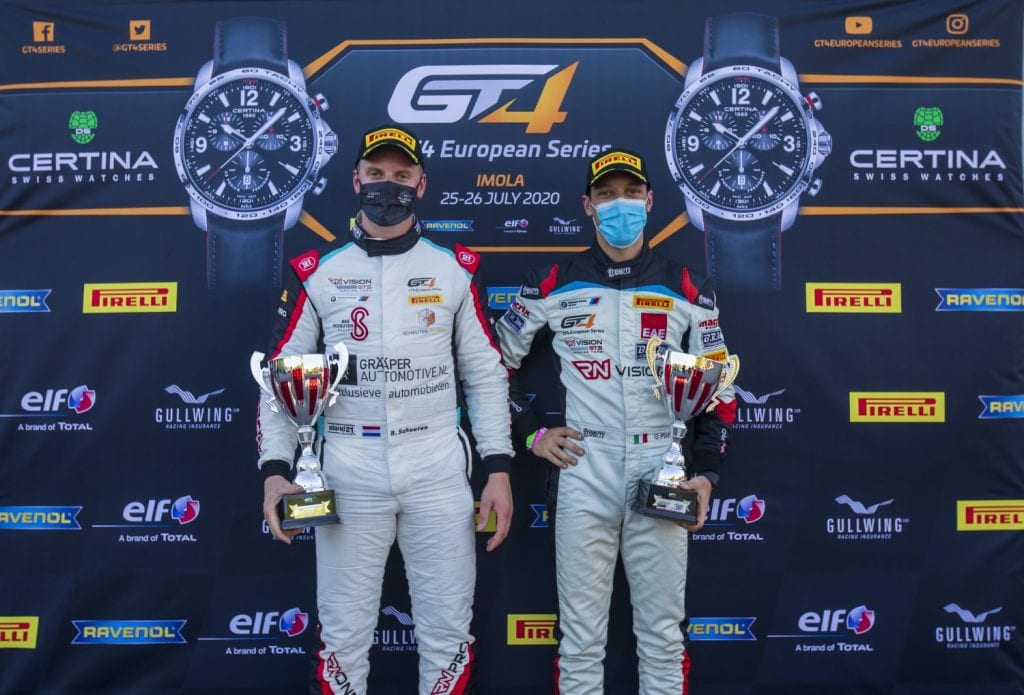 RN Vision STS finished first and third in the Silver Cup, with AGS Events claiming a second-place finish in their first race in the series. Borusan Otomotiv Motorsport won the Pro-Am class and with W&D Racing Team taking the Am Cup honours, all class victories went to BMW teams.

The #111 RN Vision STS Racing Team BMW started from the front row and followed the overall pole-sitting #12 Borusan Otomotiv Motorsport BMW as the field headed into the Variante Tamburello for the first time. However, race control stopped the race when an advertising board fell onto the track, while around the same time the #17 V8 Racing Chevrolet and the #13 Borusan Otomotiv Motorsport BMW collided, sending Ibrahim Okyay into the gravel.

After the pit stops Joel Camathias, Nicolaj Møller-Madsen and Bastian Buus closed in on the class leading BMW, but eventually the Borusan Otomotiv Motorsport BMW crossed the line to take the class win. Camathias claimed second place for Centri Porsche Ticino on his debut in the series, with Nicolaj Møller-Madsen beating Allied-Racing teammate Bastian Buus for third in class.

Bas Schouten, #111 RN Vision STS BMW: “It’s good way to start a weekend. We had a red flag situation, so that was a bit different. After that I had to cool down the engine because of the blue BMW in front of me. The engine heated up, so I had to cool [it] down. But I came in in P2, Gabi took the wheel and managed it to P1, so that’s good!”

Gabriele Piana, #111 RN Vision STS BMW: “First of all, congrats to Bas, he did a great job. We knew we had a little problem with the temperature when it’s so hot. But I did well in keeping the car in one piece and going. Things went according to plan, we wanted to be in front of the other Silver cars. I knew I had to do everything in the first two laps, as this is where the race would be decided. I came out right in front of Cem and I could see I was pulling away. That was a good sign. Then it was just a matter of managing fuel consumption and temperatures. Everything went perfect!”

Cem Bolukbasi, #12 Borusan Otomotiv Motorsport BMW: “It feels amazing. It will be a tough season because of the situation, it wasn’t easy to get here. But getting this win in the first race after all these struggles just to get on this track feels amazing. It was worth every second, so I am very happy. My teammate did a great job of keeping us in first place in Pro-Am. It feels good. Overall third place and class winners, you can’t expect more.”

Yagiz Gedik, #12 Borusan Otomotiv Motorsport BMW: “I have to thank Cem, as he did a great job. I had to keep his position. It was really hot, but I am really happy.”

Paolo Meloni, #71 W&D Racing Team BMW: “The first race after Covid-19. For us it was a good race, a good start of the season. I want to thank Stefano and the team for this result!”

Stefano Valli, #71 W&D Racing Team BMW: “It was my first experience in the series. Thanks to the team W&D, the BMW M4 and Paolo for this race. We won after difficulties from the middle to the end of the race with understeer, but in the end we monitored the distance to the others and we got the win!”