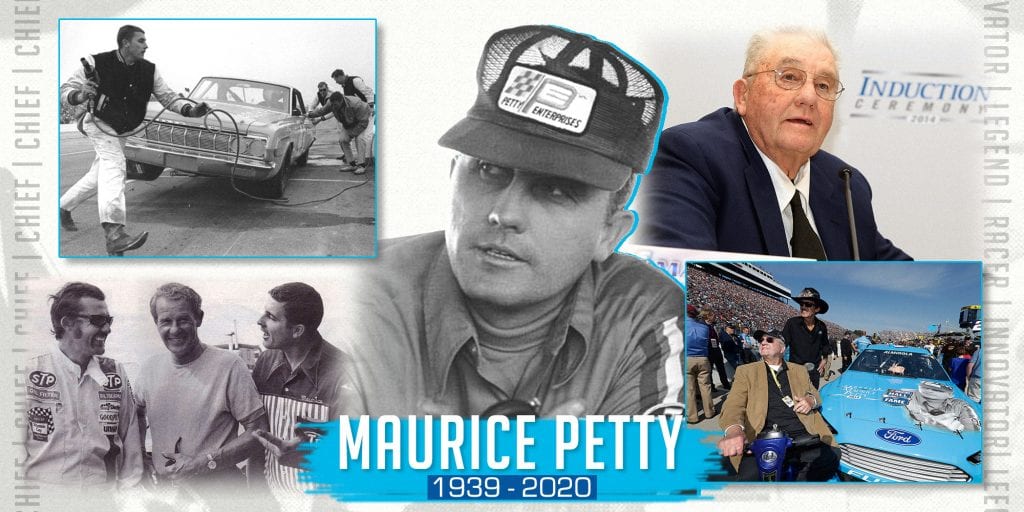 Maurice Petty is credited with 212 wins as an engine builder with nearly half-a-dozen drivers. In addition to his brother and Hamilton, Maurice Petty also built engines for winners Lee Petty, Buddy Baker and Jim Paschal.

Richard Petty Enterprises released a statement this morning nothing the death. The full statement is below.

The Petty family announces with great sadness the loss of Maurice Petty, who died peacefully on Saturday, July 25, 2020. Maurice, a stock-car racing pioneer whose career supplied the horsepower that propelled Petty Enterprises to victories, passed away surrounded by family earlier this morning. He was 81 years old.

Born in 1939 into the Petty’s of Level Cross, N.C., a legendary family known for their wins and championships, Maurice would soon become an integral part of continuing the dynasty. Maurice was a participant at track even before his teenage years, and would be part of his father Lee’s three championships and 54 wins.

Maurice, chief engine builder at Petty Enterprises, was inducted into the NASCAR Hall of Fame in 2014. He was the first engine builder to be inducted into the NASCAR Hall of Fame. Brothers Richard and Maurice Petty comprised part of a Petty family dynasty that netted 198 victories and seven titles in the sport’s premier series. He built engines that roared, and was a talented mechanic and driver, an occasional crew chief and team general manager who became known in the garage simply as “Chief.”

Maurice’s talent building engine secured his place in history — credited with 212 wins as an engine builder among six different drivers. In addition to Richard Petty, the drivers who won with his engines were Lee Petty, Buddy Baker, Jim Paschal and Pete Hamilton.

Maurice was the crew chief for Pete Hamilton for the 1970 Daytona 500 and the Talladega (Ala.) Superspeedway victories. As a driver, Maurice had 26 NASCAR Cup Series starts wth seven top-five and 16 top-10 finishes between 1960 and 1964.

He was preceded in death by Patricia, his wife of 52 years, in 2014. Patricia’s loving support was integral to his legendary career, and provided the foundation of the family.

The ‘Chief’ was one of the most talented mechanics in NASCAR history. He provided the power that helped Petty Enterprises define dominance in sports. While he was known for his work under the hood, Maurice played multiple “behind-the-scenes” roles, doing whatever it took to help deliver his cars to Victory Lane. On behalf of the France family, I offer my condolences to the friends and family of Maurice Petty, a true NASCAR giant.

Today my uncle passed away. He was the last uncle I had. I don’t know of anyone that fought harder and overcame more in life to succeed the way he succeeded. The world was a better place because of him and there is now an empty place that will never be filled again. pic.twitter.com/0lZb0qjAYx