Hyundai Motorsport returns to tarmac for the fourth round of the 2019 FIA World Rally Championship (WRC), taking place on the tight and twisty roads of Tour de Corse next week.

The iconic rally on the picturesque island of Corsica sees WRC crews tackle some of the most technically demanding, narrow and winding stages of the season, underscoring the event’s status the so-called “Rally of 10,000 Corners”.

Hyundai Motorsport will field a trio of tarmac specialists for Tour de Corse, in a bid to regain ground in its manufacturers’ championship campaign after a lackluster result in Mexico.

All three crews have previously taken victories on Corsica with seven wins between them. Belgians Thierry Neuville and Nicolas Gilsoul took the honors for Hyundai Motorsport in 2017, in addition to an Intercontinental Rally Challenge (IRC) win in 2011.

Joining them as part of the Hyundai Shell Mobis World Rally Team line-up in the 2019 edition will be Dani Sordo/Carlos del Barrio and Sébastien Loeb/Daniel Elena. The Spanish crew took an IRC triumph in 2012 while Loeb scored four consecutive wins from 2005 to 2008.

Following a difficult Rally México, Hyundai Motorsport will be looking to bounce back quickly at Tour de Corse. A heavily revised route has resulted in 80% of the routes being new for this year: the rally tours from Porto-Vecchio in the southeast of the island on an anti-clockwise trajectory through Bastia, where the Service Park is located, to culminate at Calvi in the northeast.

All three crews have tested the Hyundai i20 Coupe WRC on the tarmac in preparation for the event, well aware that the high level of competition between manufacturers will create an intense battle for the front-running positions.

Team Director Andrea Adamo said: “We remain in an upbeat and positive frame of mind heading to Corsica. The start of the season may not have delivered the results we are here to fight for, but there have been positives that give us cause for optimism. Our Hyundai i20 Coupe WRC is now ready to take on an entirely different challenge on the roads of Corsica. As a team, tarmac performance was an area on which we focused considerably last season, with improvements throughout the season. We have three specialist crews behind the wheel, so we hope we can put up a representative fight in this event.”

Crew Notes: Neuville/Gilsoul (#11 Hyundai i20 Coupe WRC)
Fourth place in Mexico saw the Belgian drop to third in the drivers’ championship
Twice victorious in Corsica, including Hyundai Motorsport’s win in 2017

Neuville said: “Corsica is a very nice event and I have great memories from previous years. I have won there twice, once in IRC and then again with Hyundai Motorsport in WRC two years ago. It’s a challenging event, with lots of corners, but a rally that I enjoy and relish. The recce is very long and demanding, but once you are in the car and can find a good flow it is a rewarding rally, one from which you can find a good sensation. As our first event of the season on the tarmac, and following the less-than-straightforward weekend in Mexico, I hope we can get things back on track.”

Crew Notes: Sordo/Del Barrio (#6 Hyundai i20 Coupe WRC)
Strong performance in Mexico despite retirement on an opening day
Won in Corsica in 2012, and claimed a podium for Hyundai Motorsport in 2017

Sordo said: “The first tarmac rally of the season, Corsica is a rally where I really feel comfortable and competitive. The stages are really nice, set against a postcard backdrop, but incredibly demanding too. Long stages and loops can make tire selection and management quite tricky. The stages themselves put pressure on the car and crew with tight, twisty corners that require maximum attention and focus. Carlos and I won Tour de Corse in IRC back in 2012, while I also finished on the podium a few years ago with Hyundai Motorsport. I hope our past success and experience, together with the performance of our i20 Coupe WRC, can help us fight for a good result this year.”

Loeb said: “Corsica is a beautiful event, with stunning landscape close to the sea, and magnificent island setting. It’s a wonderful place for rallying and as the French round of the championship, it is a very special atmosphere for me. An extremely technical rally, there are many different types of the road with some bumpy places and some fast sections. In fact, it seems to get faster each year. It is tricky to find the right rhythm throughout each stage, and the weather can also play an influential factor – sometimes raining in the mountains but drier close to the coast. Not an easy one, but fun!”

Tour de Corse takes in 14 competitive special stages over three full days of action. Following a shakedown and ceremonial start at Porto-Vecchio on Thursday, the region kick-starts the competition on Friday morning with an initial loop of Bavella (17.60km), Valinco (25.94km) and Alta-Rocco (17.37km). Crews will not have the luxury of a lunchtime service on Friday, moving onto a repeat loop in the afternoon. Saturday’s stages in the Bastia region make up more than half of the total rally distance with the loop consisting of Cap Corse (25.62km), Désert des Agriates (14.45km) and monster Castagniccia (47.18km) stages. The final morning moves northwest for an early challenge through Eaux de Zilia (31.85km) and the single Power Stage run at Calvi (19.34km). 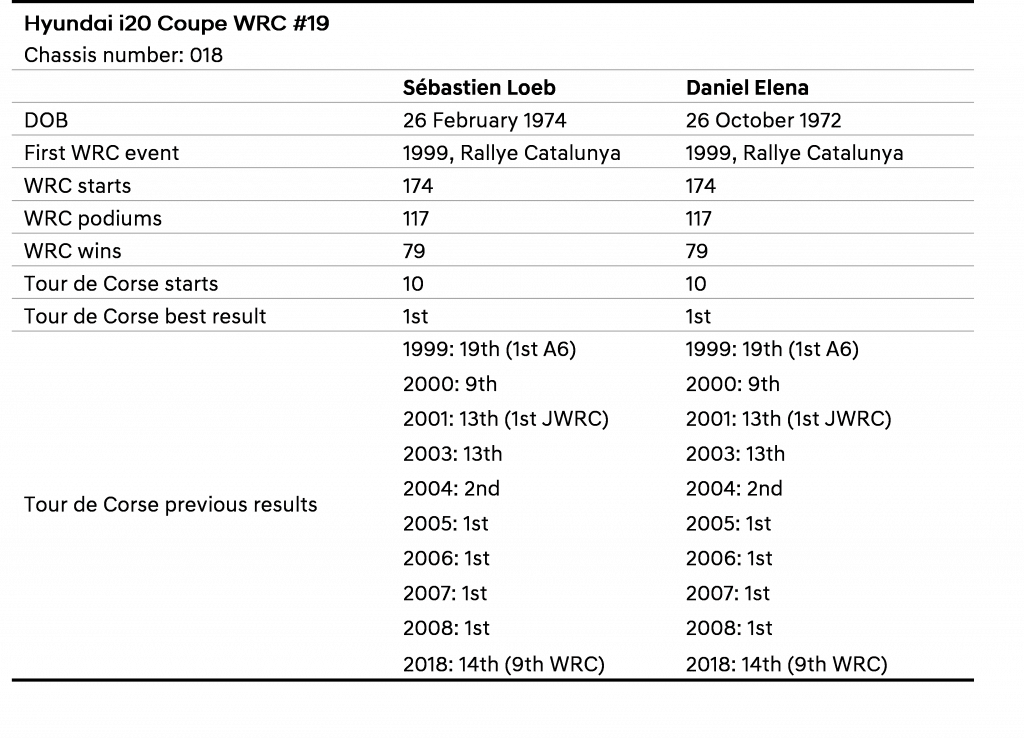 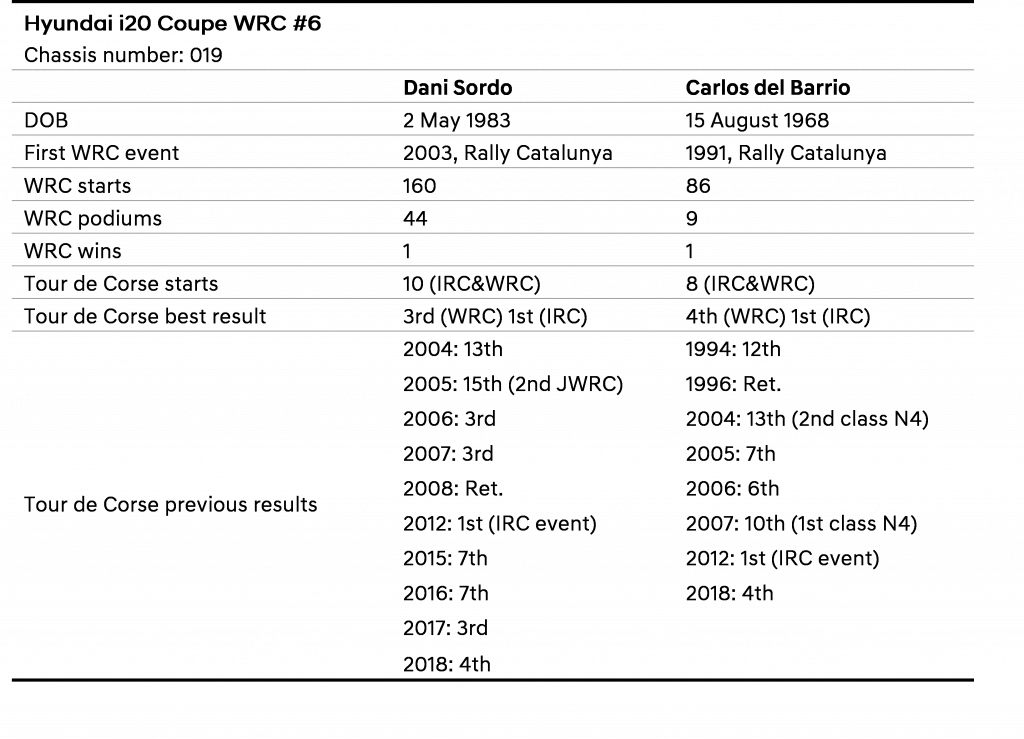 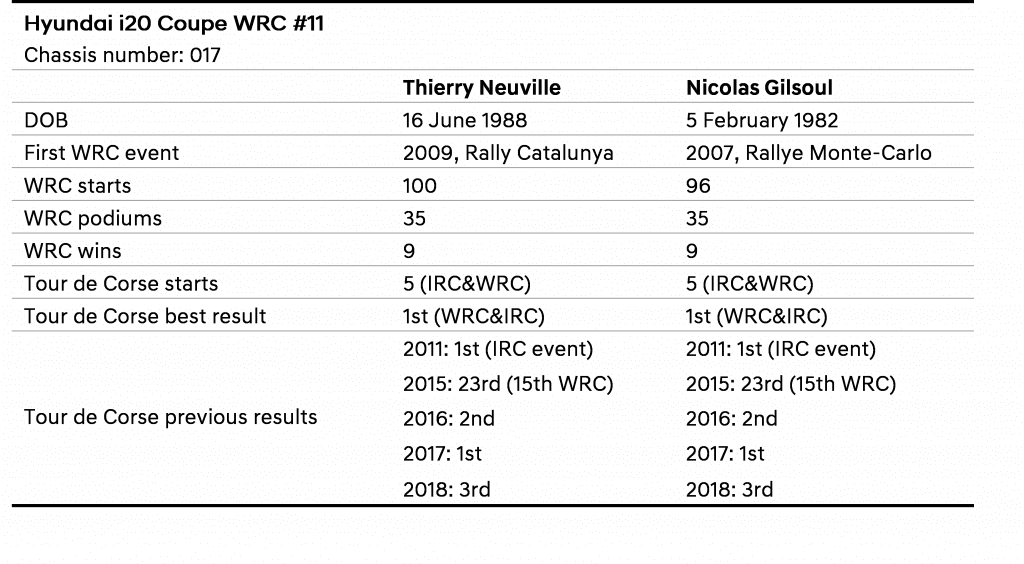