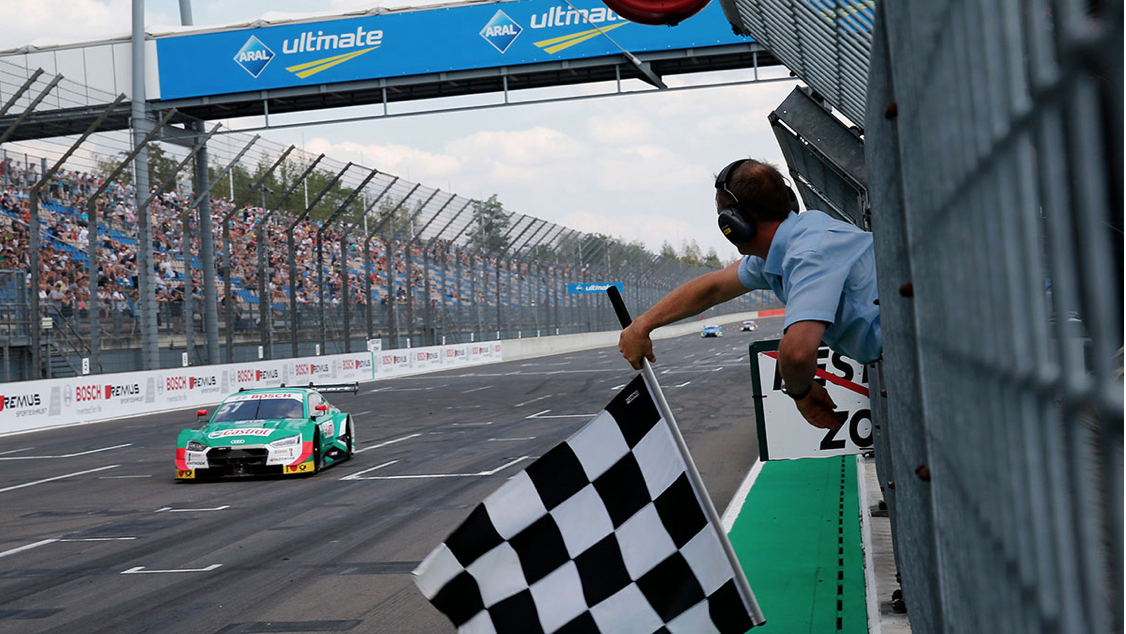 The decisive moment in the race came on lap seven: Rast had started to gradually extend his lead when he suddenly slowed at the exit of Turn Three. In close pursuit, Müller was able to quickly swerve around the slowing Audi, successfully defending from Wittmann, who was looking to take advantage of the confusion. Rast pulled his car off the track, appearing to suffer from a lack of power, but was able to briefly rejoin at the back of the field before the problem returned – this time terminally – forcing him to pull his car into the garage. From that moment, Müller assumed control of the race, managing the gap back to his team-mate, and the late-charging Rockenfeller.

Wittmann gets back into the fight

After a disappointing Race Two at Brands Hatch earlier this month, Wittmann made huge strides at the start, capitalising on a slow getaway from front-row starter Jamie Green (GBR), and Frijns, who was boxed in behind the Briton into Turn One. Green kept the pressure on, and looked set to feature in the battle for the lead at the end of the race until he received a drive-through penalty for an unsafe pit-stop release. The delay ultimately dropped him to 10th. After his stop, Wittmann’s challenge slowly faded, and he was unable to keep the early-stopping Frijns and Rockenfeller at bay; the pair each working their way past the BMW with some enjoyably entertaining overtaking manoeuvres.

A stint in the lead, but no points for Aston

Aston Martin raised pulses as Daniel Juncadella (ESP), Paul Di Resta (GBR) and Ferdinand von Habsburg (AUT) raced each other three abreast into the medium-speed esses at the end of the back straight – luckily without contact. During the mid-race tyre-stops, von Habsburg ran at the front before electing to make his mandatory stop with just a handful of laps remaining. Ultimately, the R-Motorsport nsquad arrowly missed out on points: Jake Dennis (GBR), Juncadella and Di Resta finishing in 11th to 13th positions respectively.

“Of course, I’m very happy: this was an important result for us today. This victory is great for the guys and the 1-2-3 for Audi is really valuable, too. Once I was in the lead, I was able to pull a slight gap and manage my tyres really well. My second stint seemed extraordinarily long. When René (Rast) suddenly slowed, it was quite close, but I somehow managed to find a way around him. These points are an important step, everything is open again. Now, I want to close the gap further tomorrow.” – Nico Müller, winner

“Initially, I had a good pace, but at the end, I still had to fight hard. The key to second place was my overtaking move on Marco (Wittmann). I knew I only had one shot at it and I took it. It was a nice manoeuvre. My car wasn’t perfect – we can still improve in that area, as I would still like to move up into third or fourth in the championship standings.” – Robin Frijns, 2nd place

“Towards the end of the race, I had the fresher tyres, and that paid off. The two situations with Marco (Wittmann) were hard, but fair. The first time, I pulled back. Fortunately, the contact wasn’t a problem. On the second attempt, I then braked slightly later and made it through.” – Mike Rockenfeller, 3rd place