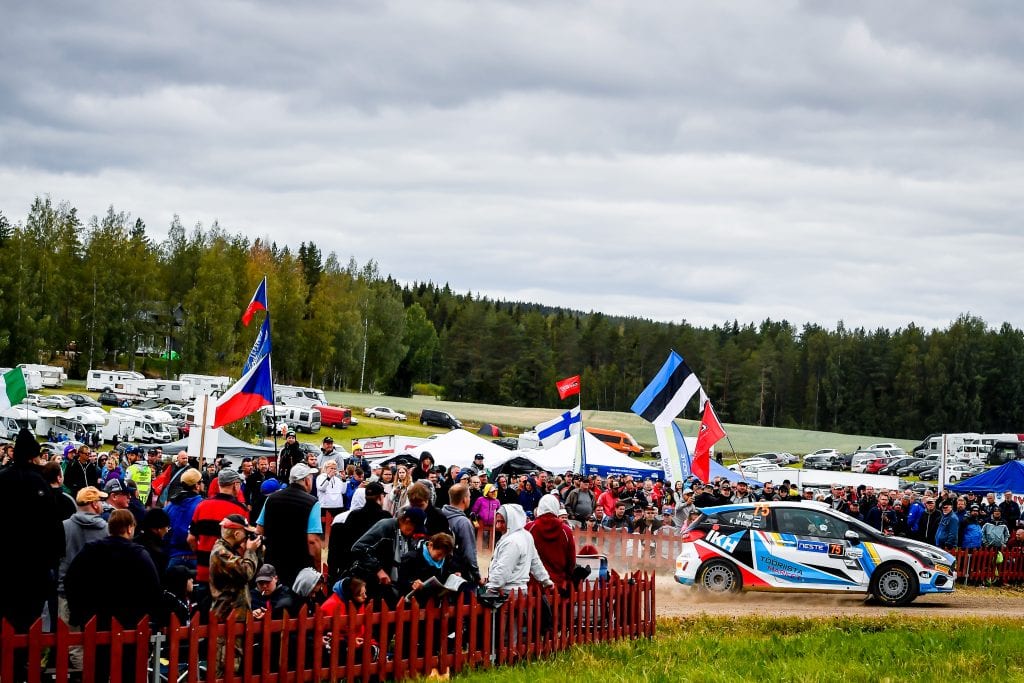 The morning loop saw four different stage winners in as many stages with Dennis Rådström drawing first blood on SS12 in his EcoBoost-powered M-Sport Fiesta R2T. The top-five saw a shakeup throughout day as the high-speed stages stopped many of the FIA Junior WRC drivers in their tracks.

Martins Sesks was the first driver to falter on the opening stage of the day, damaging his rear suspension sending him into an uncontrollable drift before he retired the car for the day.

Stage 13 proved lucky for Flying Finn Sami Pajari who claimed his second stage win of the rally. In stark contrast to Pajari, Fabrizio Zaldivar’s day concluded early on the same stage, over shooting a corner and breaking his radiator. In what could prove to be the save of the championship, Jan Solans narrowly avoided rolling and adding to the tally of retired drivers on SS13, instead losing over 49 seconds and falling to fifth.

Kristensson eventually started to build his lead again by taking his first stage win point of the day on SS14. On the same stage, Tom Williams slid off the road and into a treeline, bringing his day to a close. After a difficult morning, Solans bounced back in his Pirelli shod Fiesta to become the fourth stage winner of the day on SS15.

The second loop allowed Rådström to claim his second stage of the day, but the bigger story was Flying Finn Sami Pajari hitting a rock and crashing off the stage resulting in him retiring from the rally.

As Rådström delivered a hattrick of stage wins in a row on the second loop by SS18, Julius Tannert and Finnish wild-card Aleksi Röyhkiö added their names to the list of FIA Junior WRC casualties as they failed to finish the stage. Tannert’s incident was particularly severe resulting in him having to retire from the rally and ultimately fall out of contention for the 2019 FIA Junior WRC Championship.

Leader Kristensson signed the day off with a victory on SS19 but Rally Finland was to claim one more victim: this time it was third placed Roland Poom who went flying head-on into an apple tree.

The harsh rate of attrition meant that Solans had climbed back up to third by the end of the second loop while Sean Johnston, who had engine issues in the morning loop but had relatively clean runs, now sits fifth. Despite crashing on the last stage, due to so many competitors crashing out before him, Roland Poom only lost one position and is fourth.

“Everything worked really well, we had no mistakes, punctures, troubles, nothing. I was taking care where I was aware of larger rocks and stones that could cause damage. The pace has been really good and fun actually, I am really looking forward to tomorrow and we will see what happens.”