Jordan Gronkowski clinched his first Scottish FF1600 title at Knockhill, while Neil Broome claimed a pair of thrilling wins on the circuit’s reverse layout. A low entry of five cars forced organisers to merge FF1600 with the guesting Formula Junior grid for the weekend, with the latter playing a key role in the outcome in both races. 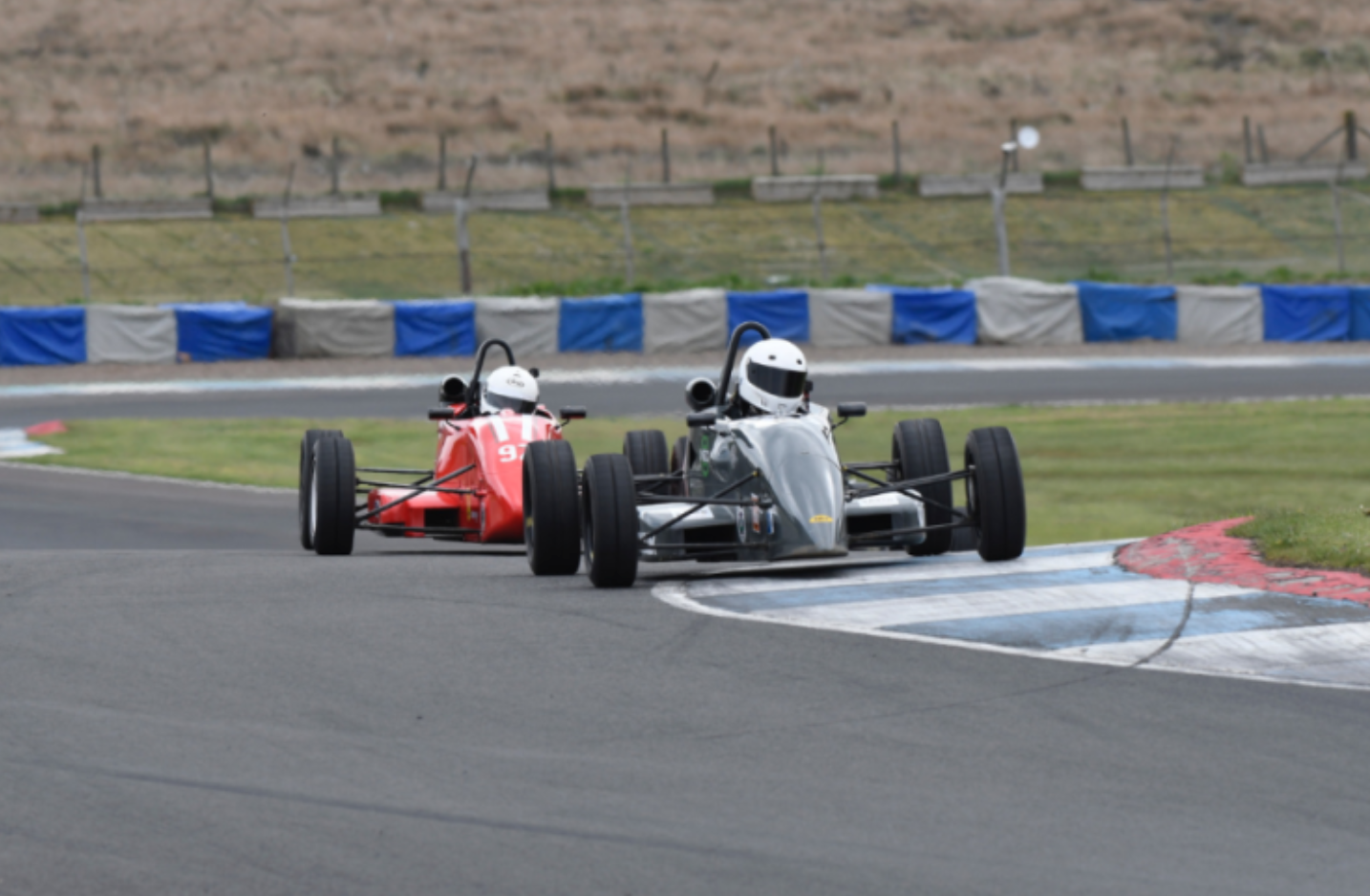 Gronkowski topped qualifying by 0.234 seconds from Matt Chisholm and Graham Brunton Racing’s Logan Hannah. Having struggled with traction off the line all season, Gronkowski benefited from a new first gear in his Van Diemen and rocketed into to lead into the Hairpin for the first time.

Hannah and Chisholm were left to dispute second place, with Broome and GBR’s Steve Barlow completing the FF1600 entries. The order remained unchanged until Gronkowski started to lap the slower FJunior cars.

Chisholm used this to claw back the 1.8s margin Gronkowski had built in the opening laps, and challenge for the lead when Gronkowski was temporarily baulked coming out of Duffus. By this time, Broome passed Hannah and began pursuing the lead pair.

Gronkowski then fell behind privateers Chisholm and Broome when he was pushed wide into the Duffus exit gravel. Chisholm’s lead only lasted a lap, as a missed gear allowed Broome to surge past. Broome held firm against a last-ditch attack from both Chisholm and Gronkowski to take his first victory since June 2017. Third place was enough for Gronkowski to seal the title.

“What can I say? It feels amazing to finally win the title,” Gronkowski told FF1600website. “To think that I’ve been at this for about 20 years, I never would have imagined being champion of Scotland. I remember the first time I went go-karting with my dad at Banff Kart Track, it felt like a long way to get to where I am now.”  “The race was a bit bittersweet. I felt like I had the pace, it’s just unfortunate that I came across the Junior at the wrong place. He basically pushed me off onto the gravel, and I just lost all the speed down the straight.”

The second race featured just four FF1600 cars as Gronkowski elected to preserve his car for the final round of the season. With that, Broome led Chisholm and Hannah away from pole into the first corner. The leading trio fought all race long, with Hannah looking the most threatening in third. She got the run on Chisholm multiple times but frequently found herself stuck behind FJunior cars.

Chisholm was never more than a second in arrears of the leader and mounted a serious attack late on in search of a first win. A mistake from Broome two laps from home nearly gave Chisholm the gap he needed as all three surged down the main straight. Resolute defence from Broome meant Chisholm couldn’t get his nose ahead in time for the chequered flag, leaving the pair split by just 0.019s. Hannah was remarkably only 0.148s further back – her third podium on the reverse layout.