Yesterday on a sunny afternoon at the legendary Brands Hatch circuit in Kent, UK, 21-year-old Jamie Chadwick (UK) won the first ever single-seater series for female drivers only, the 2019 W Series championship.

Having started from pole position, following a scintillating lap in the dying minutes of this morning’s qualifying session, she took the lead at the start of this afternoon’s race ahead of Alice Powell (UK), who had qualified alongside her on the front row. Poor Esmee Hawkey (UK), having qualified a brilliant third, stalled at the start and ended up last on lap one. Third on lap one therefore was Emma Kimilainen (FIN), who had been quickest in both the wet and the dry in yesterday’s free practice sessions but had qualified only fourth this morning.

Jamie, Alice and Emma circulated at the front for the first 10 minutes, in close formation but in line astern, the three of them mastering the testing twists, turns and undulations of the famous Kentish racetrack with impressive speed and precision. Then, essaying a bold and opportunistic manoeuvre on the championship leader, perhaps figuring that she would not wish to risk her championship by resisting too stoutly, Alice hurled her car inside Jamie’s on the entry to Paddock Hill, ran wheel to wheel with her into the downhill compression then up the hill to Druids, and made her move stick as the two cars ran around that slowest corner on the circuit. At the same time Emma lost no time, no time at all, and also managed to pass Jamie, demoting her to third.

Alice was now in the lead, but Emma was close behind. In third place was Jamie, her championship rival Beitske Visser (NLD) now just behind her in fourth. The British spectators who had risen to their feet to cheer Alice taking the lead now gasped audibly as they realised that the battle for the championship was now very much on.

With 10 minutes to go, the Safety Car was deployed as a result of a spin by Miki Koyama (JPN), who was having a somewhat chaotic race, and that closed up the field for the final charge to the line. Miki’s car took four minutes to be moved to a place of safety, leaving just six minutes remaining of the allocated 30 (plus one lap) when the message came “Safety Car in this lap”. As Alice led the field into Clearways and the Safety Car peeled into the pit-lane, she cleverly bunched up the field then nailed it onto the straight, expertly establishing a lead over Emma that she would never lose.

Emma therefore had to settle for second place but, just behind her, as so often this season, Jamie and Beitske were now running nose to tail, the flying Dutchwoman determined to wrest third place from her British rival despite the fact that doing so would not be enough to change the championship standings. Nonetheless she managed it, taking the final podium position with just three laps to go. Jamie therefore finished fourth, the first time this season that she had failed to record a podium finish, but it was not important: she had done enough to be champion, and that was all that mattered.

Fifth was Fabienne Wolhwend (LIE), having driven another typically competent race, while sixth and seventh, having battled each other hell for leather throughout, were Vicky Piria (ITA) and Jess Hawkins (GB); the six points that Jess thereby scored were enough to lift her from 14th in the championship to joint 11th with Sabre Cook (USA), who finished ninth today, thereby earning them both (ie, Jess and Sabre) positions in the all-important top 12, guaranteeing them both participation in the championship next year. Eighth today was Marta Garcia (ESP) and 10th, the last of today’s points scorers, was Sarah Moore (UK).

“What a brilliant race, and what a wonderful season!

“Alice drove superbly today, finally taking the race victory that she’s been threatening to deliver all season, and Jamie capped a hugely impressive summer with an extremely mature drive to fourth place, thereby sewing up the first ever W Series championship. Well done!

“Finally, I want to thank all the drivers, and all the staff, as well as our friends and partners at DTM, Hitech, Tatuus, Autotecnica Motori, Hankook, ATS, Puma, Hintsa and the BRSCC.

“Roll on next year!”

“After six great races – seven if you include the experimental non-championship reverse-grid race we ran at Assen – Jamie today converted her championship lead into a championship victory. She’s driven with impressive poise all summer, always fast yet invariably measured, and there’s no doubt that she’s a serious prospect for more senior formulae in the future. She’s still only 21, after all.

“Her season-long rival, Beitske, has also impressed, finally losing out by just 10 championship points [100 to 110]. She says she therefore regards W Series as ‘unfinished business’ and understandably so: she’ll start next year’s W Series championship as one of the favourites.

“Finally, Alice drove a typically fast and forceful race today, taking a well deserved victory. She too will be one of the favourites next year.

“Last but not least, I want to thank our colleagues at Hitech, who have done a fantastic job all summer, as well as all at Tatuus and Autotecnica Motori, who have supplied us with 20 great racing cars.”

“To be the inaugural W Series champion is simply unbelievable. It’ll sink in soon I’m sure, but it hasn’t yet.

“This year has been a whirlwind, and today’s race was more intense than any other racing day I’ve ever had. Even though I finished only fourth, I was just so happy finally to cross the line and secure the championship.

“The whole W Series experience has been incredible. At the beginning of the year I thought it just might be a great season. I suspected that W Series had the potential to be something big, but I never expected it to be this big. Obviously, each race has got bigger and better but coming here to Brands Hatch, my home circuit, well, I’ve simply never experienced anything like it. I’ve never felt attention from the spectators as much as I did today, and that really is a credit to W Series. It’s been an incredible opportunity for all of us, and the things I’ve been able to go on to do alongside W Series have made it by far the best year of my career so far.” 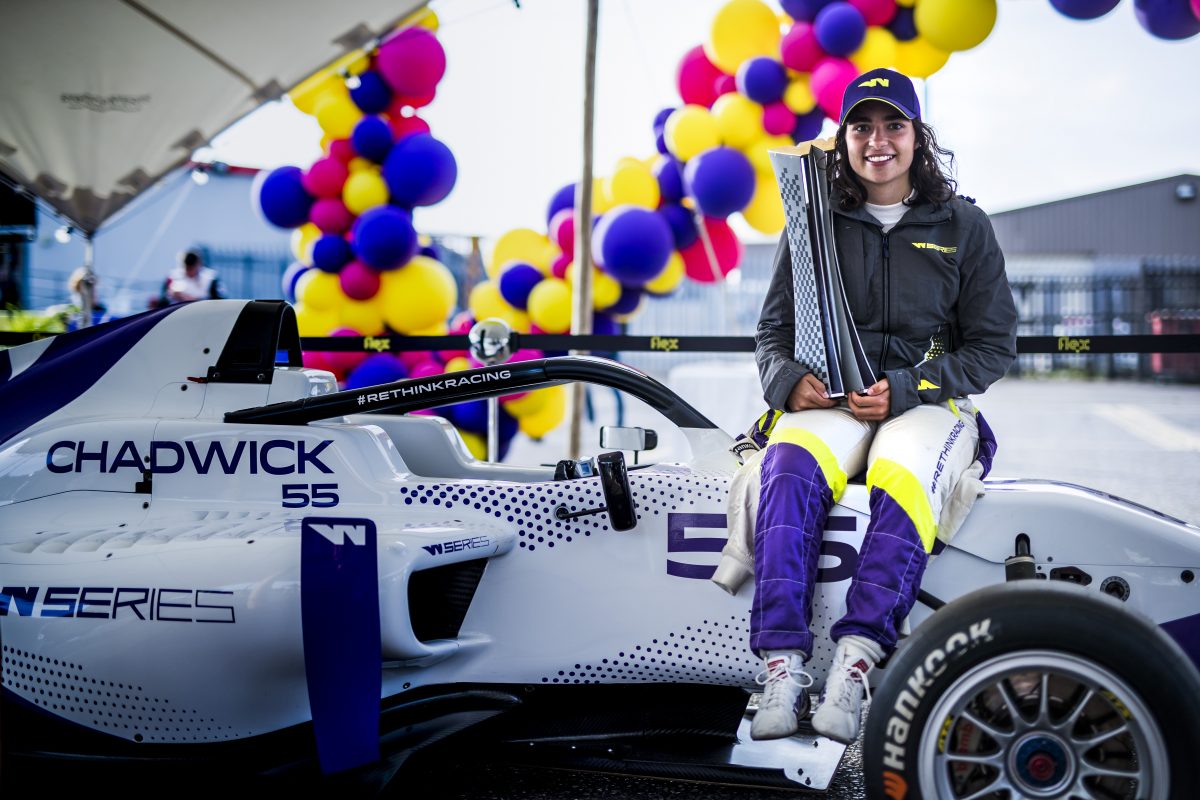 “The victory champagne tasted very, very good today. I had a tough middle of the season, but to bounce back to be second in Assen and first here at Brands Hatch in front of my home crowd has been incredible – it’s been a truly wonderful day.

“Going into the race, I knew that the first couple of laps were going to be tricky because today was always going to be about managing the pace and keeping it consistent for the win. So I stayed patient and was pleased when I realised I had a pace advantage over Jamie. I wanted to get past her as soon as possible so I threw one up the inside at Paddock Hill. Jamie did really well to try and fight me around the outside but I managed to muscle it out and take the lead at Druids.

“After that I always felt confident that I could handle Emma. Then, when the Safety Car came out, I made the best restart of my life. I think that might have caught Emma out and thus enabled me to take the win – which is just amazing.

“The crowd has been incredible today and that’s a huge credit to the way W Series has promoted us drivers. There’s been so much attention on all of us this weekend, especially the five Brits. It’s incredible to have so much support around us, and to win in front of my home crowd is fantastic.” 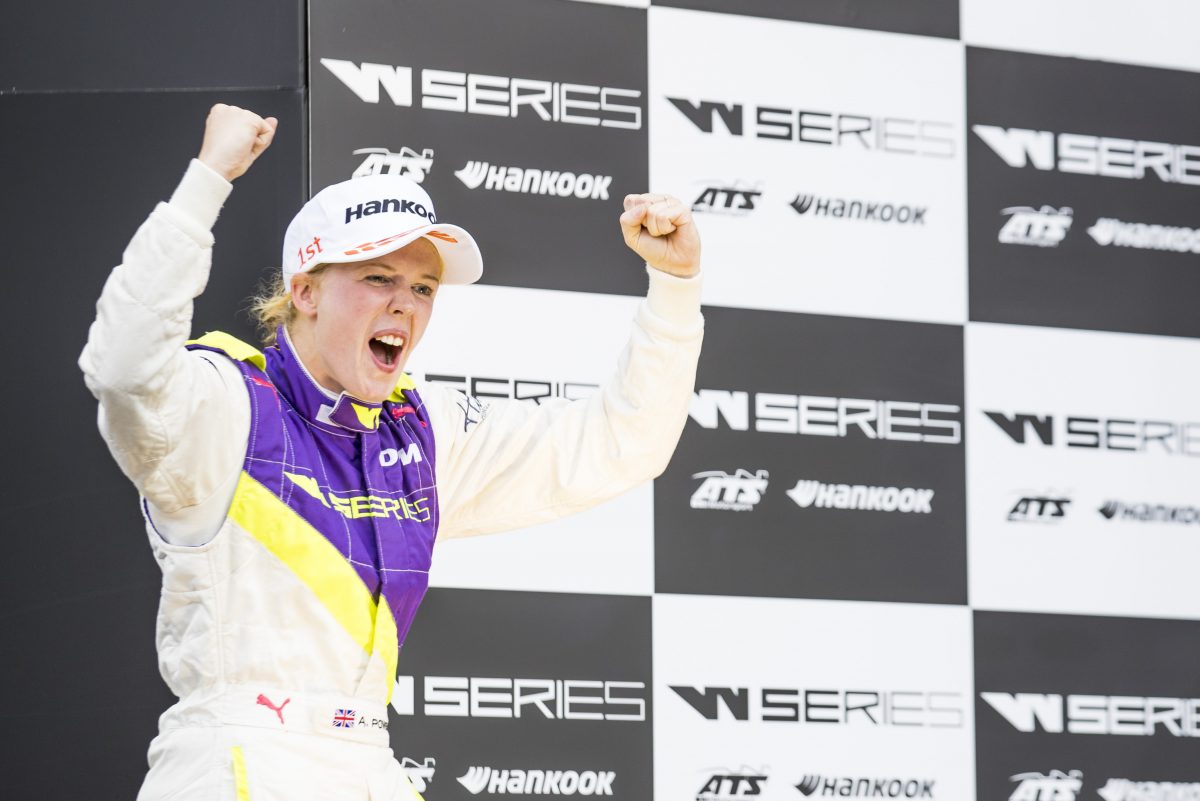 “I was pleased with my performance yesterday. I tend to get on the pace quickly, so I don’t need a lot of time to build up my speed. Even so, I didn’t manage to get the pole position I’d ideally wanted because I was on completely shot tyres by the end – the fact that I did my best lap on them shows that the track was getting faster all the time.

“Even so, I was happy to start the race from fourth – not too far back – and I had a good start. I knew I had the pace to race for the win. I had really good pace just before the Safety Car, I was planning to push for the win at the end, but Alice did the restart really well – she blew me away actually – and that was the end of it really.

“Obviously this season has been a bit mixed for me – I missed the first half basically – so I’ll be aiming to be champion next year!” 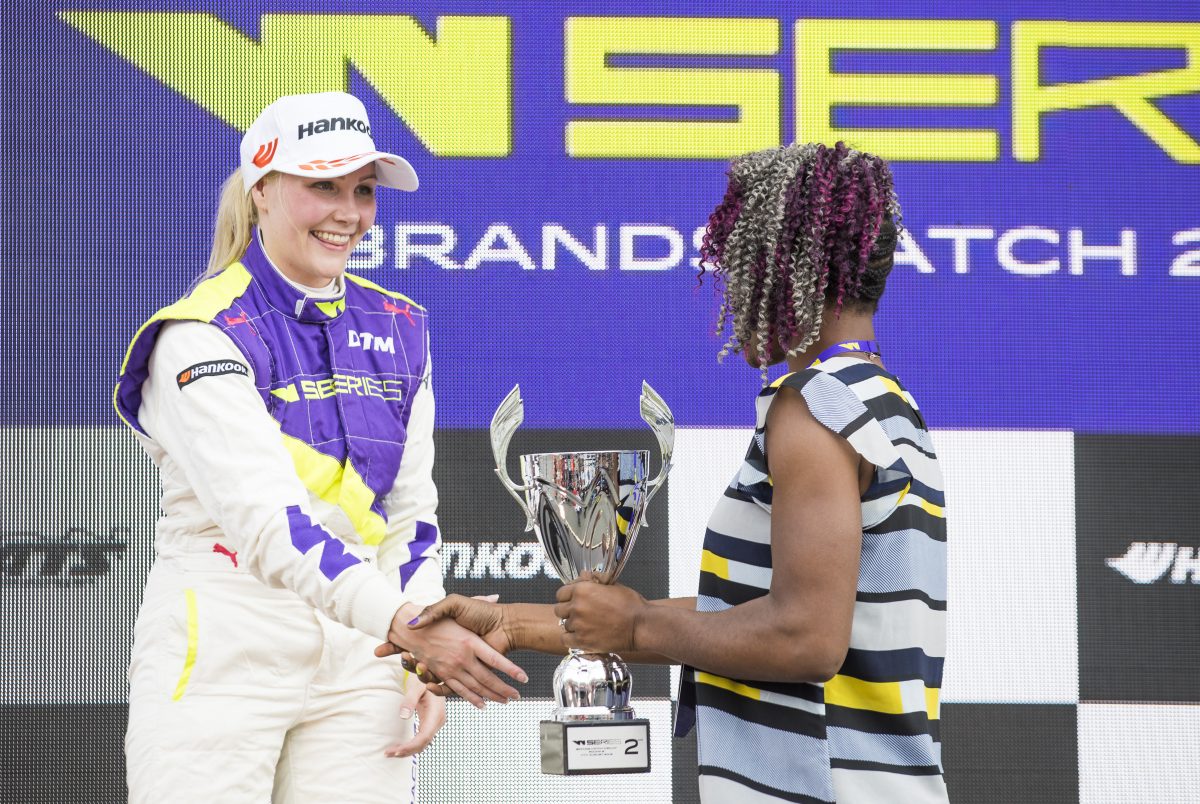 “I think it’s been a great season. We’ve had the speed in every single race.

“But I knew it was going to be hard today because it’s a track I don’t know. I had to learn it yesterday, but yesterday I didn’t really drive enough laps because of electrical issues. That meant I was still learning the track today in qualifying. So, all things considered, to start the race from P5 wasn’t too bad.

“In the race my pace was strong but it’s not easy to run close to another car here. Fortunately, though, Jamie made a small mistake towards the end of the race and that enabled me to pass her for third place.

“I did everything I could today, and I’m happy with my race. Unfortunately, it wasn’t enough to change the championship standings but I don’t think I could have done any more.” 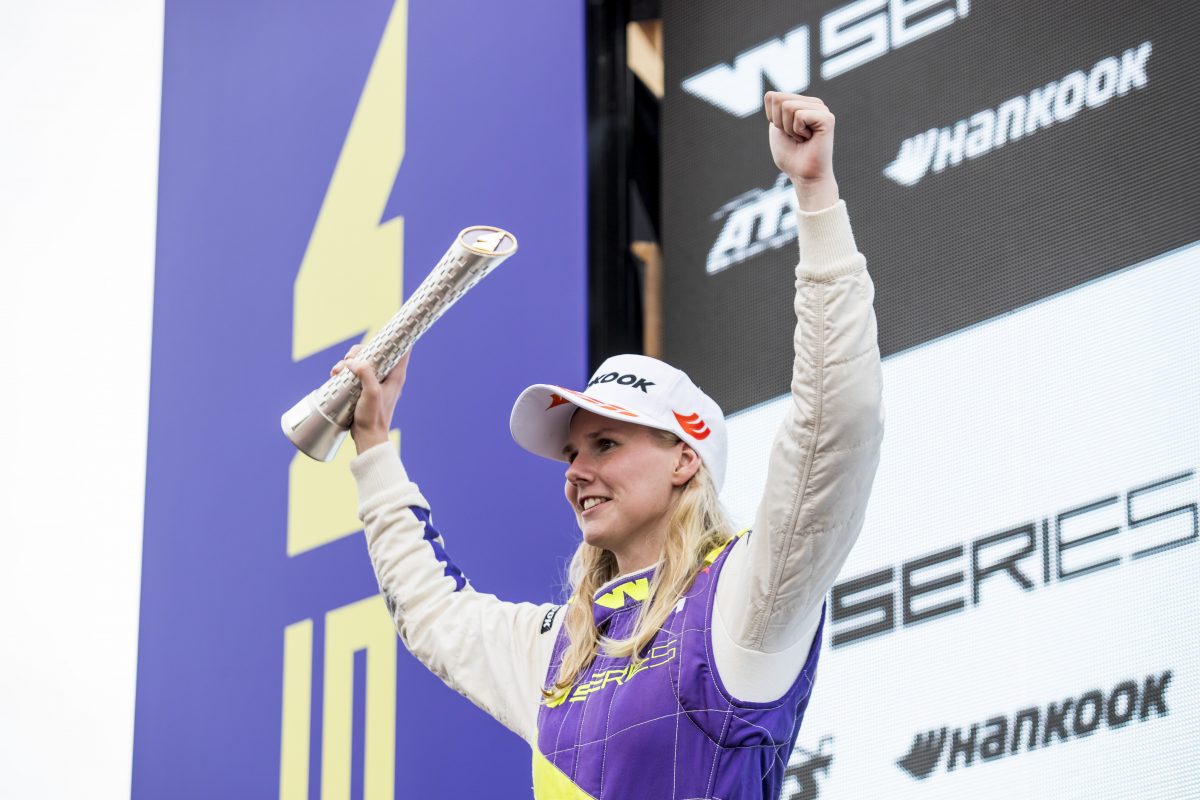