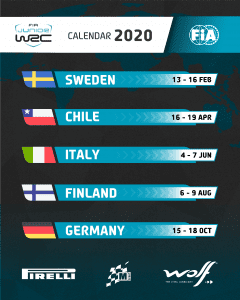 The prize package for the 2020 FIA Junior WRC Champion is regarded as ‘the biggest prize package in rallying’ and is integral in allowing the best of the next generation to showcase their talent on the international stage. The 2020 Champion will be handed the keys to a brand new EcoBoost powered M-Sport Fiesta R5 Mk II with 200 Pirelli tires, free WRC 3 registration for the 2021 season and five free entries. Should the 2020 Champion go on to win the 2021 WRC 3 Championship they will then receive two drives with the M-Sport Ford World Rally Team in the 2022 season.

The Rookie Award returns for the 2020 season, with a €15,000 scholarship prize for the highest placed FIA Junior WRC Rookie to go towards their 2021 season in FIA Junior WRC.

The calendar serves as a thorough test to see which driver will have what it takes to seize championship glory and join the likes of WRC superstars Sebastien Loeb, Dani Sordo, Sebastien Ogier, Elfyn Evans, Craig Breen, and Pontus Tidemand.

The addition of Rally Chile now makes FIA Junior WRC a worldwide championship that allows the future stars of the WRC to experience five of the best events on the 2020 WRC calendar. It also marks the first time that the single-make FIA Junior WRC Championship heads to South America. 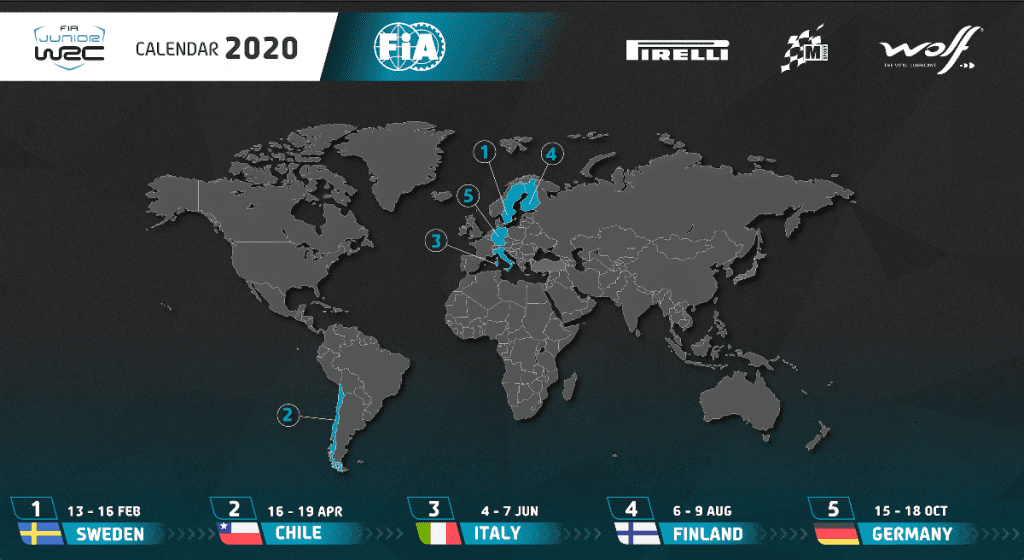 Round 1: Sweden 13 – 16 February
The rally has played host to the launch of the FIA Junior WRC Championship since 2018, making it one of the most hotly anticipated rounds of the season. Picturesque lakeside roads and forests in the Värmland region make up Rally Sweden’s stages, the only round of the world championship that takes place purely on snow. But make no mistake: Snow and ice don’t mean that the drivers will be tiptoeing around. With studded Pirelli Sottozero Ice tires fitted to every M-Sport Ford Fiesta R2T, it’s one of the fastest rallies of the year for the Junior WRC crews.

Round 2: Chile 16 – 19 April
The first gravel event for the 2020 Junior drivers to tackle in their M-Sport Fiesta R2Ts will be Rally Chile, the first time the event features on the FIA Junior WRC calendar. After making its WRC debut in 2019, Rally Chile became an instant hit with drivers, fans, and teams. Thursday evening’s ceremonial start for 2019 was a sight to behold in the Plaza de la Independenzia in the center of Concepción as the FIA Junior WRC crews are set to add to the spectacle in 2020. The rally tackles stages that meander through some of Chile’s dense forests used by timber truckers when the world’s best rally drivers aren’t storming down them.

Round 3: Italy 4 – 7 June
Rally d’Italia Sardinia returns to the FIA Junior WRC calendar after a nail biting thriller in 2019 that saw eventual champion Jan Solans go head to head with Dennis Rådström, trading stage wins and the lead several times. Sardinia represents the second of three gravel events in 2020, crews will face fast but narrow stages with loose gravel, which become more rutted as each car passes through. It can also get rather warm inside the FIA Junior WRC Ford Fiesta R2s, with no air conditioning (to save weight) and ambient temperatures in the region of 30°C.

Round 4: Finland 6 – 9 August
No rally can match the lightning pace and prestige of Rally Finland. The Jyväskylä-based event is the fastest on the calendar, featuring packed gravel roads with blind crests and jumps, plus flowing fourth and fifth gear corners that entice the drivers to keep their feet planted on the throttle. 2019 saw plenty of action with a packed entry and six different stage winners across Finland’s iconic stages. The forest roads are wide, so picking the right racing line is key to unlocking speed, helping the rally earn its unofficial moniker of the ‘Finnish Grand Prix’. Drivers will need plenty of sisu – a word the Finns use to describe implacable courage – to contend for victory here.

Round 5: Germany 15 – 18 October
The Junior WRC’s grand finale in Germany offers double points to crews that have completed at least three of the previous four rallies. A confusing plethora of twisting asphalt awaits the FIA Junior WRC crews in Germany, speeding through the iconic vineyard stages and around a seemingly infinite but epic sequence of hairpin bends. Regarded as the toughest tarmac challenge of the season, Germany will feel that much more difficult for those in contention for the championship. It already promises to be a thriller and that’s before considering the inevitable rain clouds that normally appear on the German rally.