René Rast was his usual quick self in qualifying for the weekend’s second DTM race at the Nürburgring this morning, but his Audi Sport Team Rosberg stablemate Jamie Green was ever so slightly quicker, edging out the German by a mere thousandth of a second in the dying seconds of Sunday morning’s session. 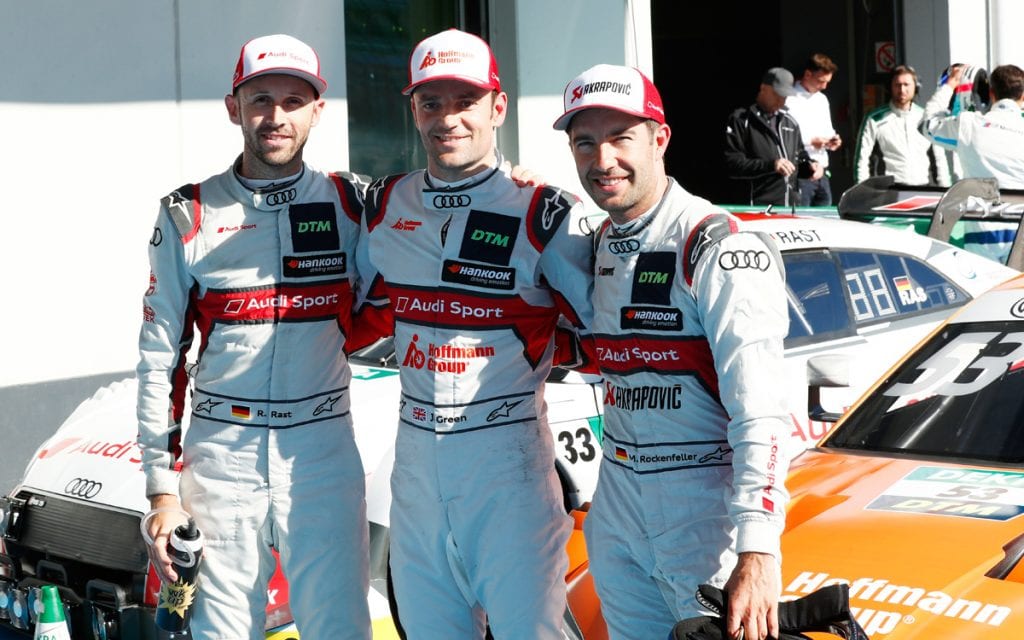 With his time of 1m20.032s, Green claimed his second pole position of the year, repeating his qualifying success on Sunday from the previous round at the Lausitzring.

“I’m really happy with being on pole,” Green said after the session. “I managed to get one at Lausitzring last time out, and to do the same here is probably even more rewarding – this is a track where I haven’t had that much success in the past. I think that René is particularly good at this circuit, so to have out-qualified everyone today is a really nice feeling.”

Points’ leader Rast in second place completed the clean sweep of the front row for the Rosberg team.

Local driver Mike Rockenfeller qualified third ahead of Dutchman Robin Frijns, who was excluded from yesterday’s race results after post-race scrutineering revealed that one of the tyres he used in the race hadn’t been allocated to his car.

WRT-Audi’s Jonathan Aberdein was fifth – once again underlining the strong pace he has shown all weekend – from Loïc Duval, who completed the Audi-lock-out of the first six positions.

The next two grid rows were occupied by the BMWs of Timo Glock, Marco Wittmann, Bruno Spengler and Sheldon van der Linde qualifying seventh to 10th, in that order.

Timo Glock set the pace for BMW. “Generally, I’m more or less happy with qualifying,” he said. “I’m the best placed BMW driver; but seventh place doesn’t feel that good. We made a slight change compared to yesterday, and that made it a bit more difficult to attack on the brakes, but generally, the lap was quite okay. I hope for a trouble-free race in which, hopefully, we can score some points this time.”

Wittmann’s failure to score any points in qualifying means that the German is no longer in contention for the title, which will be decided solely between Rast and Nico Müller. The Swiss, however, only qualified 14th, one place ahead of Ferdinand von Habsburg, who was the fastest of the R-Motorsport Aston Martin drivers. The Austrian’s teammate Paul Di Resta was unable to complete a timed lap due to technical issues, which ultimately forced him to miss the race.